Oracle recently released an update to their Java 6 platform which could cause problems for GenePattern users.  The update disables the underlying technologies used by several of GenePattern components, specifically the visualization modules (such as ComparativeMarkerSelectionViewer and HeatMapViewer) and the file uploader.  The GenePattern team is currently evaluating options to address this issue.

This update came out within the last couple of weeks, so you may or may not have already applied this change depending on the update policies of your organization and the settings on your own computer.  It is known by several different names, including at least the following:
The update removes the Java Plug-in for web browser and Java Web Start features which had been present in earlier versions of Java 6.  The most visible sign that you are affected will be the display of a 'Missing Plug-in' or similar error message when trying to run a visualizer or use the uploader.  Here's an example from Firefox 16.0.1 running on Mac OS X Lion (the exact message may differ depending on your browser and operating system): 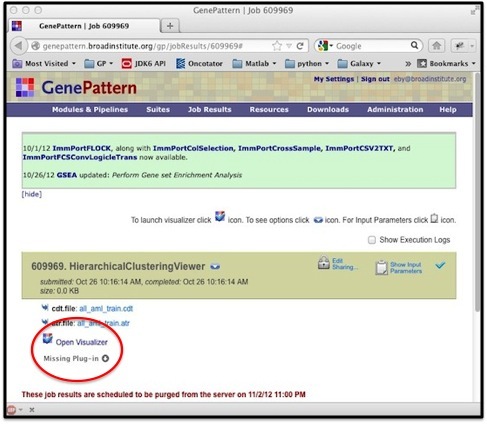 You can also check whether the update has been installed by running 'java -version' from the command line (Command Prompt in Windows, Terminal in OS X, or a UNIX shell prompt).  A response similar to:
java version "1.6.0_37"
indicates that the update has been installed on your computer.
Unfortunately, as it stands we cannot give our users a blanket recommendation about how to proceed as there are disadvantages to any approach.  There are three options:
Oracle has issued release notes and an associated Critical Patch Advisory with Risk Matrix about the update itself and the security implications around it.  For Mac users, Apple has a knowledge base entry on the matter.  We encourage you to review this information before making any decisions and consult with your organization's IT department before making any changes.  For users within the Broad Institute, the IT recommendations can be found here.  We cannot, however, make any recommendations on behalf of other organizations.