Evaluates a genomewide expression profile and determines whether a priori defined sets of genes show statistically significant, cumulative changes in gene expression that are correlated with a phenotype.  The phenotype may be categorical (e.g., tumor vs. normal) or continuous (e.g., a numerical profile across all samples in the expression dataset).

Gene Set Enrichment Analysis (GSEA) is a powerful analytical method for interpreting gene expression data.  It evaluates cumulative changes in the expression of groups of multiple genes defined based on prior biological knowledge.  It first ranks all genes in a data set, then calculates an enrichment score for each gene set, which reflects how often members of that gene set occur at the top or bottom of the ranked data set (for example, in expression data, in either the most highly expressed genes or the most underexpressed genes).

Microarray experiments profile the expression of tens of thousands of genes over a number of samples that can vary from as few as two to several hundreds. One common approach to analyzing these data is to identify a limited number of the most interesting genes for closer analysis. This usually means identifying genes with the largest changes in their expression values based on a t-test or similar statistic, and then picking a significance cutoff that will trim the list of interesting genes down to a handful of genes for further research.

Gene Set Enrichment Analysis (GSEA) takes an alternative approach to analyzing genomic data: it focuses on cumulative changes in the expression of multiple genes as a group, which shifts the focus from individual genes to groups of genes.  By looking at several genes at once, GSEA can identify pathways whose several genes each change a small amount, but in a coordinated way.  This approach helps reflect many of the complexities of co-regulation and modular expression.

GSEA therefore takes as input two distinct types of data for its analysis:

The GSEA GenePattern module uses either categorical or continuous phenotype data for its analysis.  In the case of a categorical phenotype, a dataset would contain two different classes of samples, such as "tumor" and "normal."  In the case of a continuous phenotype, a dataset would contain a numerical value for each sample.  Examples of numerical profiles include the expression level of a specific gene or a measure of cell viability over the course of a time series experiment. The GSEA desktop application, available on the GSEA website, has additional functionalities.  For instance, the GSEA desktop application can conduct an enrichment analysis against a ranked list of genes, or analyze the leading-edge subsets within each gene set.  Many of these capabilities are also available in separate GP modules (see GSEAPreranked and GSEALeadingEdgeViewer).

GSEA first ranks the genes based on a measure of each gene's differential expression with respect to the two phenotypes (for example, tumor versus normal) or correlation with a continuous phenotype.  Then the entire ranked list is used to assess how the genes of each gene set are distributed across the ranked list.  To do this, GSEA walks down the ranked list of genes, increasing a running-sum statistic when a gene belongs to the set and decreasing it when the gene does not.  A simplified example is shown in the following figure.

The enrichment score (ES) is the maximum deviation from zero encountered during that walk.  The ES reflects the degree to which the genes in a gene set are overrepresented at the top or bottom of the entire ranked list of genes.  A set that is not enriched will have its genes spread more or less uniformly through the ranked list.  An enriched set, on the other hand, will have a larger portion of its genes at one or the other end of the ranked list. The extent of enrichment is captured mathematically as the ES statistic. 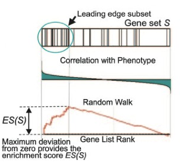 Next, GSEA estimates the statistical significance of the ES by a permutation test.  To do this, GSEA creates a version of the data set with phenotype labels randomly scrambled, produces the corresponding ranked list, and recomputes the ES of the gene set for this permuted data set. GSEA repeats this many times (1000 is the default) and produces an empirical null distribution of ES scores.  Alternatively, permutations may be generated by creating “random” gene sets (genes randomly selected from those in the expression dataset) of equal size to the gene set under analysis.

Typically, GSEA is run with a large number of gene sets.  For example, the MSigDB collection and subcollections each contain hundreds to thousands of gene sets.  This has implications when comparing enrichment results for the many sets:

The ES must be adjusted to account for differences in the gene set sizes and in correlations between gene sets and the expression data set. The resulting normalized enrichment scores (NES) allow you to compare the analysis results across gene sets.

The nominal p-values need to be corrected to adjust for multiple hypothesis testing. For a large number of sets (rule of thumb: more than 30), we recommend paying attention to the False Discovery Rate (FDR) q-values: consider a set significantly enriched if its NES has an FDR q-value below 0.25.

Input expression datasets with the character '-' or spaces in their file names causes GSEA to error.

The GSEA GenePattern module interprets the sample labels in categorical CLS files by their order of appearance, rather than via their numerical value, unlike some other GenePattern modules. For example, in the CLS file below:

If the sample labels are in numerical order, as below, no difference in behavior will be noted.

This file contains the expression dataset.

2. gene sets database file: GMT, GMX, or GRP file (optional, if you do not select a gene set database from the drop-down)

A gene set file not available in the current version of MSigDB (and thus not listed in the gene sets database parameter drop-down).

A continuous phenotype CLS may define multiple phenotypes.  Each phenotype definition assigns a numerical value for each sample.  This series of values defines the phenotype profile.  For example,

A chip annotation file not available in the module drop-down list.